Known for providing movement and drama in a landscape, a wide variety of ornamental grasses are available in our area. Depending on their location within a landscape and your planting zone, many of these native plants of North Texas can live for a few seasons (annual), die off or the plant goes dormant and returns each year (perennial), or remain in bloom year round (evergreen). We would like to highlight the top five ornamental grasses for North Texas. 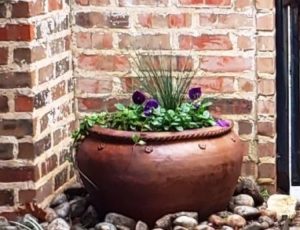 Juncus grass is easily identified by its grayish-blue blades. These blades are strong and mostly upright, resembling tall grass.

Blue Arrows Juncus grass grows between 1-2 feet wide and tall and should be planted in an area with partial shade. Keep the plant moist and be on the lookout for tiny flowers at the tip of the grass in summer. 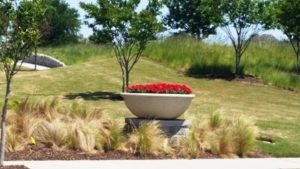 Mexican Feather grass is considered one of the more delicate of the ornamental grasses. Its delicate foliage will sway with even the softest breeze. While Mexican Feather grass can easily be planted on its own as a single planting, it is most often seen as a mass planting in a meadow or on a slope.

Mexican Feather grass is considered to be a bit more of a warm climate grass and is hearty in zones 6-9. It should be treated as a perennial and therefore be expected to go dormant through the winter season. Plan time to cut it back along with other spring landscaping duties before the new spring growth arrives to keep it tidy.

Mexican Feather Grass will grow approximately 18” tall and arches out to almost 12” wide. Plant in full sun and, once established, needs only occasional watering. 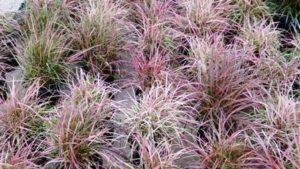 One of the absolute favorite of all the ornamental grasses, the Purple Fountain grass is widely appreciated for both its dramatic foliage color and abundant plumes.

While hearty only in zones 8-11, the Purple Fountain grass should be treated as an annual in most places and expected to die with the first freeze. However, this plant has been known to occasionally survive a North Texas mild winter. 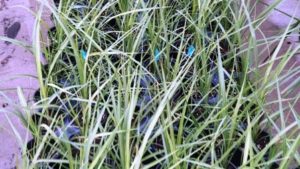 Carex grass, also referred to as Sedge is technically not a grass at all but due to its shorter grass-like foliage, is widely planted en masse along borders of landscaping beds.

Considered hearty in zones 5-9, you can treat Carex grass as a semi-evergreen plant in your garden. This means that during milder winters, you observe no foliage die back at all.

Carex comes in a many varieties, but most grow to about 12” tall and between 12” and 18” wide. Most varieties of Carex prefer partial shade and do best with consistent weekly watering. 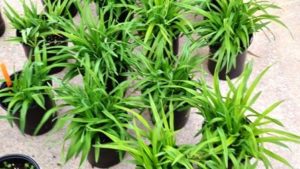 Although commonly considered a groundcover plant, Liriope is one of the most widely used grassy looking plants in North Texas. It’s also known as Lilyturf, is used strategically in narrow planting spaces, under shade trees and in border areas of landscaping beds.

Liriope is hearty in zones 5-11, and can be enjoyed throughout the state of Texas as an evergreen grass.

Liriope comes several varieties that average between 12” and 20” tall and wide. While it can survive in full shade, it blooms best with some sun exposure. You can expect the hallmark purple lavender looking blooms late spring each year. Water regularly and occasionally once established.

If you’re looking for a dramatic ornamental grassy plant to fill a specific location when landscaping a new home or need something hearty to fill an entire meadow, there are no shortages of ornamental grass options for you to consider.